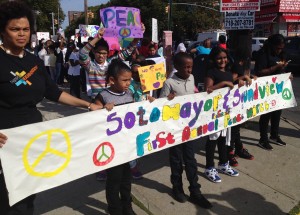 This summer, young people involved in Phipps Neighborhoods’ summer programs at the Cornerstone Centers at Sotomayor and Soundview engaged in a dialogue about social justice. Sadly, this conversation became very real to the youth in July, when Christian Garcia, their 20-year-old neighbor, was shot and killed. Many of the young people we serve knew Christian personally, and they were all deeply affected by his death so close to home.

This tragic event made the conversation about social justice all too real for these children and teens, and led to an increasingly empowering discussion. At the end of the summer, the young people decided to do something proactive to keep the conversation going – and planned a Peace March for Friday, September 25th (Antiviolence Day). The march began at the Cornerstone Community Center at Soundview Houses and included a walk to the playground where Christian was killed where they placed flowers as a symbol of peace and were joined by Christian’s family. The march concluded at the Cornerstone Community Center at Sotomayor Houses, where there was a program for community members featuring community leaders and motivational speakers. The formal program was followed by an interactive discussion designed to help the youth offer positive solutions to the challenges in the community.