Posted by support@phippsny.org on October 30, 2014 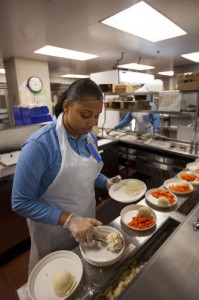 Unemployed (USURTOT) and pregnant with her second child in late 2013, Shantel Burris knew she needed to make a change. In a year, the 24-year-old went from jobless benefits to earning double the New York minimum wage.

Her first step was getting a high school diploma, and a chat with a counselor sparked a “nonstop” process of preparation centered on 11 weeks of free job training and a battery of mock interviews at Career Network: Healthcare. The New York initiative trained and matched her with a position in August at Montefiore Medical Center, where she prepares patient meal trays for $16.08 an hour.

“I probably would have had to work two jobs to get what I’m making now,” the Bronx resident said. “Attending this program was like getting a foot in the door. It’ll help me get ahead in life.”

Programs like Career Network seek to alleviate a shortage of workers in jobs that require less than a bachelor’s degree though more than a high school diploma. For the 146.2 million Americans who are 18 and older without an associate’s or higher degree, such opportunities offer a pathway to higher pay and job stability that would be difficult to find on their own.

Success hinges on identifying openings at local employers and equipping a spectrum of Americans — from the jobless to the underemployed — with needed skills. Such programs might also help hiring catch up with job vacancies, which are near a record high.

“We definitely need to be using better, more real-time labor-market information about where the jobs are, and we need to do this at a very local level,” said Alicia Sasser Modestino, a former senior economist at the Federal Reserve Bank of Boston and now an associate professor at Northeastern University.

About 4.8 million jobs went unfilled in August even as 9.6 million Americans were unemployed, Labor Department data show. Hiring has been slow to accelerate, fanning concern there’s a shortage of qualified workers.

Modestino’s research found that in regions with high unemployment in 2007 to 2012, employers “raised the bar” for education and experience for middle-skill openings without lifting pay because they had their pick of candidates. Workers now need more help spotting opportunities and training accordingly, as “the demand for skills is shifting rapidly,” she said.

In 1973, 28 percent of jobs required at least some education or training beyond high school, according to Georgetown University’s Center on Education and the Workforce in Washington. That share rose to 56 percent in 1992 and is projected to reach 65 percent by 2020.

The need for a demand-driven approach became apparent when JPMorgan Chase & Co., as part of its philanthropic efforts, explored ways to reduce the so-called skills gap. The New York-based company in December announced New Skills at Work, a five-year $250 million global project to tailor training to available jobs.

A common hurdle is that workers “have to figure it all out on their own,” said Chauncy Lennon, who leads the initiative. In addition to deciding which skills to acquire, “it’s very hard for people to see where the job opportunities are.”

“It’s a way to reduce the risk for job seekers,” Lennon said. Findings will be “a good signal for these folks” that once they’re armed with training, “there are jobs waiting at the end of that path.”

About 2.6 million, or 46 percent of working-age New Yorkers, lack the post-secondary credentials to fill middle-skill jobs, according to the first of JPMorgan’s studies being released today. The findings will guide New York Mayor Bill de Blasio’s Jobs for New Yorkers task force.

More than 1 million workers are in middle-skill jobs with a median hourly wage of $31.88 in New York City, the report said. That compares with the state’s minimum wage of $8 an hour, and recent requirements that some employers receiving city subsidies pay as much as $13.13.

Two of the city’s fastest growing sectors — health care and computer and information services — made up about 45 percent of all middle-skills postings between July 2013 and June 2014, the report found. Area employment is projected to grow during the next five years by 14 percent in health care and 15 percent in technology.

Bronx resident Terri McLaurin, 26, said college and her dream of becoming a nurse were delayed when she became pregnant. After working retail jobs “trying to get by,” she became a home health aide last year. The part-time job isn’t enough to make ends meet, with McLaurin and her 5-year-old son living in a temporary housing shelter in Phipps Neighborhoods.

Her caseworker connected her to Career Network to learn interview techniques, prepare a resume and identify in-demand positions. This week she started a certification program to become a patient-care technician to assist nurses.

She hopes to get a job with Montefiore, which would “provide more stability” with better hours, McLaurin said. “I know with the health field, you have to keep learning, keep going to school, and I’m looking forward to that.”

President Barack Obama also has committed to reducing the skills mismatch through the Workforce Innovation and Opportunity Act, which he signed into law in July. It streamlines federal training initiatives, measures efficiency and provides grants.

Emphasis on a more targeted approach is also central to the JPMorgan project, Lennon said. “Train and pray” hasn’t worked, he said, citing Labor Secretary Thomas Perez’s criticism of training provided in the hope that jobs would follow.

The bank’s U.S. effort will be replicated in Paris, London, Barcelona and Turin, Italy.

“It’s a template for other communities to say, ‘We’ve got to invest in this kind of data so that we can get better alignment between what employers are looking for and what job trainers are providing,’” Lennon said.

Friction often arises in the labor market because companies want training to be finished outside the workplace, said Peter Cappelli, director of the Wharton Center for Human Resources at the University of Pennsylvania in Philadelphia. That leaves community colleges, workforce initiatives and students bearing the financial brunt of preparation.

“It’s a supply-chain problem,” Cappelli said. “The closer supply and demand are together, the better because you get less waste. There’s no way to make that close without employers being engaged.”

In middle-skill occupations, “workers don’t move and migrate as much as we think they do,” Modestino said. A mismatch also arises when training programs rely on Labor Department five-year projections and similar sources that are “accurate about 60 percent of the time” on occupational demand.

Burris, the dietary worker at Montefiore, is already eyeing what she could make as a top-earner with a registered nursing degree.